Turkey has advanced tremendously over the last 15 years and this has caused intense discussion in some circles as to whether modern and urban development is killing culture and traditions.

The positive kickback to these concerns is many people from the older generations are making a concentrated effort to keep old traditions alive and one of them is Ebru painting, a creative art-form dating from the Ottoman Empire.

What is Ebru Painting?

In the West, we call it Paper Marbling but the process is exactly the same. Paints on placed onto the surface of a thick liquid and swirled into patterns or designs before a thin canvas is placed on top. The canvas instantly absorbs the patterned paints and while the concept might seem easy, it takes practise to perfect.

Ebru Painting in the Beypazari Region of Turkey

In the Living Museum of Beypazari, I saw Ebru painting for the first time. A young girl standing behind a desk beckoned me over. Her job was to demonstrate Ebru painting as part of the history of the region. Apparently only extremely creative artists of the Ottoman era, used to paint like this but in later years, it spread into normal everyday society as a hobby. 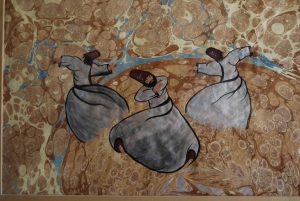 At a super-fast speed, she swirled the paints, placed her canvas over the top and produced a lovely picture with a smile!

The ease with which she did it, reminded me of a popular art program, I watched as a child that included a plasticine figure called Morph and a talented artist called Tony Hart, who seemed to have a permanent grin on his face.

“Eh no” I blurted out. I didn’t want to look stupid with my amateur techniques. I would probably end up with more paint on the floor than on the canvas.

As I left Beypazari and headed to Cappadocia, I realised declining the chance was a mistake. After all, it was free. Unable to turn back, I assumed one day, I would get another opportunity to try it.